CELVIANO Grand Hybrid reproduces even subtle nuances of the world’s most respected pianos. Three pianos that originate in Berlin, Hamburg and Vienna were chosen for this project. CASIO has painstakingly researched and analyzed the unique characteristics of each piano. CELVIANO Grand Hybrid delivers brilliant sound of these pianos reproduced with CASIO’s advanced technology. It will provide the experience of owning three of the finest pianos on earth.

A balanced, elegant sound. Ideal for playing impressionistic music. Notable for its clear, ringing tone across the entire range.

A brilliant, rich sound. Loved by pianists for its wide range of expression. Well suited for various playing styles and genres.

Noted for its impressive low range. Great for both soft and vigorous playing with its warm tone. An ideal instrument for music from the classical period. 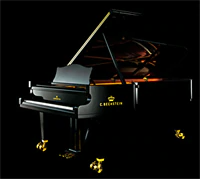 Since Carl Bechstein founded the Pianoforte production facility in Berlin in 1853, the name C. Bechstein has stood for the highest class of upright and grand pianos. C. Bechstein pianos have been appreciated by many famous composers and artists for their finest quality of sound and touch for many years. In the 21st Century, C. Bechstein is still recognized as one of the world’s leading piano manufacturers. On an acoustic grand piano, the volume and quality of sounds change from the time the keys are struck until they die away. CASIO's Multi-dimensional Morphing technology enables natural, smooth transitions in sound volume and tone based on the power of the keystroke. This technology contributes to more expressive performances. 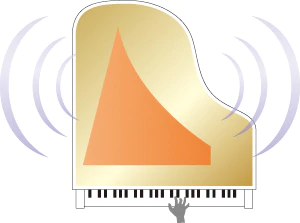 The various types of resonance in a grand piano are crucial to the playing experience. The CELVIANO Grand Hybrid incorporates String Resonance, which exposes the harmonic relationships between various strings when keys are struck. Also Damper Resonance reproduces the resonance occurring when a damper pedal is pressed. CASIO's Resonance System reproduces the resonance of both the strings and sound board of a grand piano by selecting, controlling and synthesizing according to performance conditions.

The lengths of the lingering sounds produced by a grand piano vary depending on the speed at which players release their fingers after pressing the keys. In a similar fashion, CASIO’s Key Off Simulator controls the length of these sounds based on the key’s release speed. This enables players to express delicate nuances when playing staccato and legato. 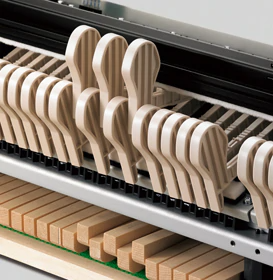 The timing of a grand piano’s sound varies subtly depending on which keys are being played, even when the keys are struck with the same force. To achieve optimal authenticity, CASIO has installed appropriate settings for each of the three grand piano tones. The sound production timing can also be adjusted to suit the player. 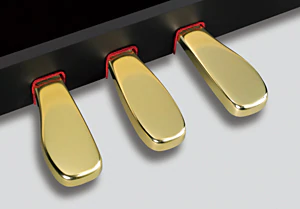 By continuously sensing and detecting the position of the damper pedal, CASIO’s Grand Pedal System enables fine-tuning of the damping volume and note length depending on the degree of pedal depression. In addition, the Half Pedal Position function permits adjustment of the depression position at which the damping effect comes into play according to the player's preference. The Action Sound System’s Damper Noise and Pedal Action Noise features, in the case of the GP-500BP, reproduce even subtle operating sounds like that experienced with an acoustic grand piano. CASIO has developed a new dedicated speaker system for the CELVIANO Grand Hybrid that reproduces the characteristics of sound emanating upwards and downwards from an acoustic grand piano. The four-channel audio system incorporates six speakers, carefully positioned in a structural design that releases sound outward from the interior of the body. The system delivers the same sound field experience a player would enjoy while playing an acoustic grand piano.

The CELVIANO Grand Hybrid’s design includes a top panel that can be manually raised and lowered. The lid’s position not only physically affects the sound coming from the upper speakers, but also works in conjunction with the “Lid Position” setting to accurately duplicate the characteristics of the adjustable lid on an acoustic grand piano.
The volume and timbre of sound produced by a grand piano change depending on the degree to which the lid is open or closed. The Lid Simulator simulates these acoustic effects digitally. Pianists can select among four settings for opening and closing stages and enjoy playing music with the piano sound effect of their choice.

*The Lid Simulator’s setting value remains unchanged, regardless of whether the piano's top board is open or closed.

Twelve types of Hall Simulator are included; each one based on careful analysis of the acoustic characteristics of a world-famous concert venue. Each space has a total of four Listening Position settings. For example, the pianist can simulate the experience of hearing the piano from a seat in the audience, as opposed to the playing position.

Volume Sync EQ is especially useful for quiet playing at home and other times when you want to keep the speaker volume low. This function balances the sound at low volumes by adjusting the sound quality in the low and high registers. The result is a constantly pleasant playing experience, no matter where the volume is set. When the piano is played at low volume, natural sound is maintained through compensation of the tone in the low and high ranges. 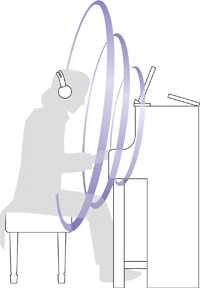 Headphone Mode automatically creates a spacious sonic image while wearing headphones, recreating the feeling of playing an acoustic piano. With the experience of wearing headphones significantly enhanced, pianists can enjoy playing naturally and feeling the sound field of a traditional grand piano.

Your performance demands authenticity
It begins at the first touch

The player’s movement is transformed into music with many important factors. The most tangible factor is the keys. CELVIANO Grand Hybrid delivers authenticity from the first touch. The revolutionary new Natural Grand Hammer Action keyboard is made with full-length, wooden keys. Its new mechanism incorporates real hammers that follow the same path of motion as in a concert grand piano. When the lid is lifted, you can see the hammers in motion through a clear panel as you play. Going beyond a standard acoustic mechanism, this new action allows faster note repetition than acoustic pianos, while maintaining a true piano touch.

For an authentic piano touch, CASIO has developed a new keyboard system called the “Natural Grand Hammer Action Keyboard”. This keyboard system features full-length wooden keys as well as hammers that follow the same path of motion as in a concert grand piano. CELVIANO Grand Hybrid features keys that are manufactured using exactly the same materials as acoustic grand piano. Careful attention is paid not only to finish of the surfaces of the keys but also to the quality of the wood employed for the key beds. This combination of an outstanding action mechanism and superior-quality key materials further enhances the sensation of playing an acoustic grand piano.
Learn more 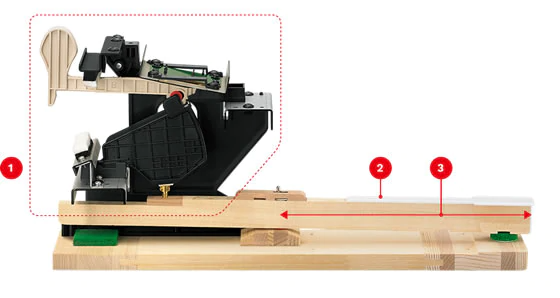 The core of CELVIANO Grand Hybrid’s keyboard performance is created by CASIO's proprietary action mechanism. This mechanism includes a hammer movement modeled from a grand piano and three sensors, which accurately capture a performer expression from the keys. Since there are no physical strings, CASIO's action is able to exceed the performance characteristics of a grand piano, providing superior playability that enables pianists to perform such actions as trills and repetitive notes with ease.

The use of acrylic for the white keys and phenol for the black keys — the same materials that modern grand pianos employ. This creates a welcome and familiar touch. Pianists will feel comfortable and confident on the keys of CELVIANO Grand Hybrid.

The position of the fulcrum with respect to the keys is exactly the same as with a grand piano. This contributes to stable playing performance, since the touch is never heavier or lighter depending on the position at which a finger strikes a key. 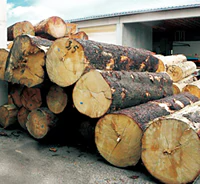 The keyboard is made of the same high-quality Austrian spruce as the keyboards on C. Bechstein grand pianos. Careful attention is paid to drying and processing of this high-quality material before keyboard construction begins. 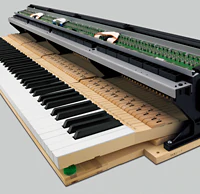 The keyboard is developed to ensure superior piano performances by considering each of the 88 keys independently and how they perform together as a single unit. Perfection of the keyboard is pursued as well through attention to such factors as load changes and key return speeds. 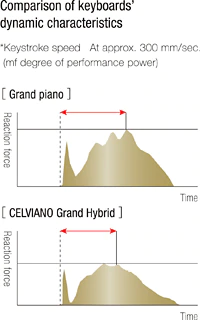 Beyond simply detecting the overall force of a key being played, the entire travel of the key is precisely modeled after the behavior of a grand piano

CELVIANO Grand Hybrid includes a Hall Simulator featuring numerous world-class performance venues. Using advanced analysis and signal processing, CASIO has recreated the acoustic characteristics of renowned concert halls, opera houses, cathedrals and other performance spaces around the world. You can instantly select one of these settings, creating an immersive atmosphere for your performance.
Learn more

Play with a symphony orchestra

CELVIANO Grand Hybrid’s Concert Play feature gives you the role of solo pianist with an orchestral performance. The sound system plays the orchestral part accompanying you. Works by Tchaikovsky, Pachelbel, Smetana and others are featured. The tempo of these pieces can be slowed down to facilitate practice.
Learn more

Playing with an orchestra is an extraordinarily thrilling event. Concert Play feature demonstrates orchestral performance for a pianist to enjoy an experience of playing as a soloist accompanied by a full orchestra. 15 pieces of music are built in. When you practice, a convenient playback function offers capabilities of play, pause, fast-forward, rewind and A-B segment repeat. Using a Slow Mode, the tempo of these pieces can be slowed to 80% of normal speed as needed.

CELVIANO Grand Hybrid pianos have the ability to record performances on USB flash memory available on the market as stereo audio files (44.1 kHz, stereo .WAV format). Recordings can be stored or played back on a computer or transferred to CDs or other media. The piano’s built-in full playback function permits use of such features as pause, fast-forward, rewind and A-B segment repeat.

*Software available on the market may be required for producing CDs.

This function enables players to record their own performances freely in the CELVIANO Grand Hybrid’s memory. It helps users improve their playing skills by reviewing their own performances objectively afterwards. This full playback function permits use of such features as pause, fast-forward, rewind and A-B segment repeat during playback.

CELVIANO Grand Hybrid includes 60 piano pieces in its “Music Library”. The scores for these pieces are included and CELVIANO Grand Hybrid’s features are ideal for learning. Left and Right hand parts can be practiced separately. Tempo can be changed and an A-B segment repeat allows you to practice a section of the piece. Each piece has a selected preset tone but players can enjoy their own choice from the Berlin Grand, Hamburg Grand and Vienna Grand tones.

*Some musical scores are not published due to copyright issues.

The keys to the left and right of center on the keyboard can be set to the same tonal range. This Duet Mode is convenient when two players, such as a parent and child or a teacher and student, practice together.

The layer function enables pianists to overlap two types of tones, while the split function lets them separate tones into lower and higher blocks.

To conserve energy, CELVIANO Grand Hybrid will Automatically Power Off when the instrument has not been played for 4 hours.

Intuitive control of CELVIANO Grand Hybrid is possible through a simple, considerately designed control panel. The Berlin Grand, Hamburg Grand and Vienna Grand are easily accessed with dedicated buttons for each piano tone.